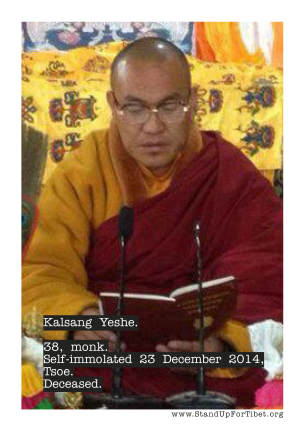 23 December 2014: A well-known Tibetan monk set himself on fire and called for “the return of the Dalai Lama to Tibet”. He died during his protest.

Kalsang Yeshe, a Tibetan monk known for his work teaching others about Buddhism, set fire to himself and died Tawu, the Tibetan area of Kham. According to sources, Kalsang Yeshe staged his protest near a police station that had been established recently by his monastery, Nyitso, where repression of monks and local people has been particularly intense in recent years.