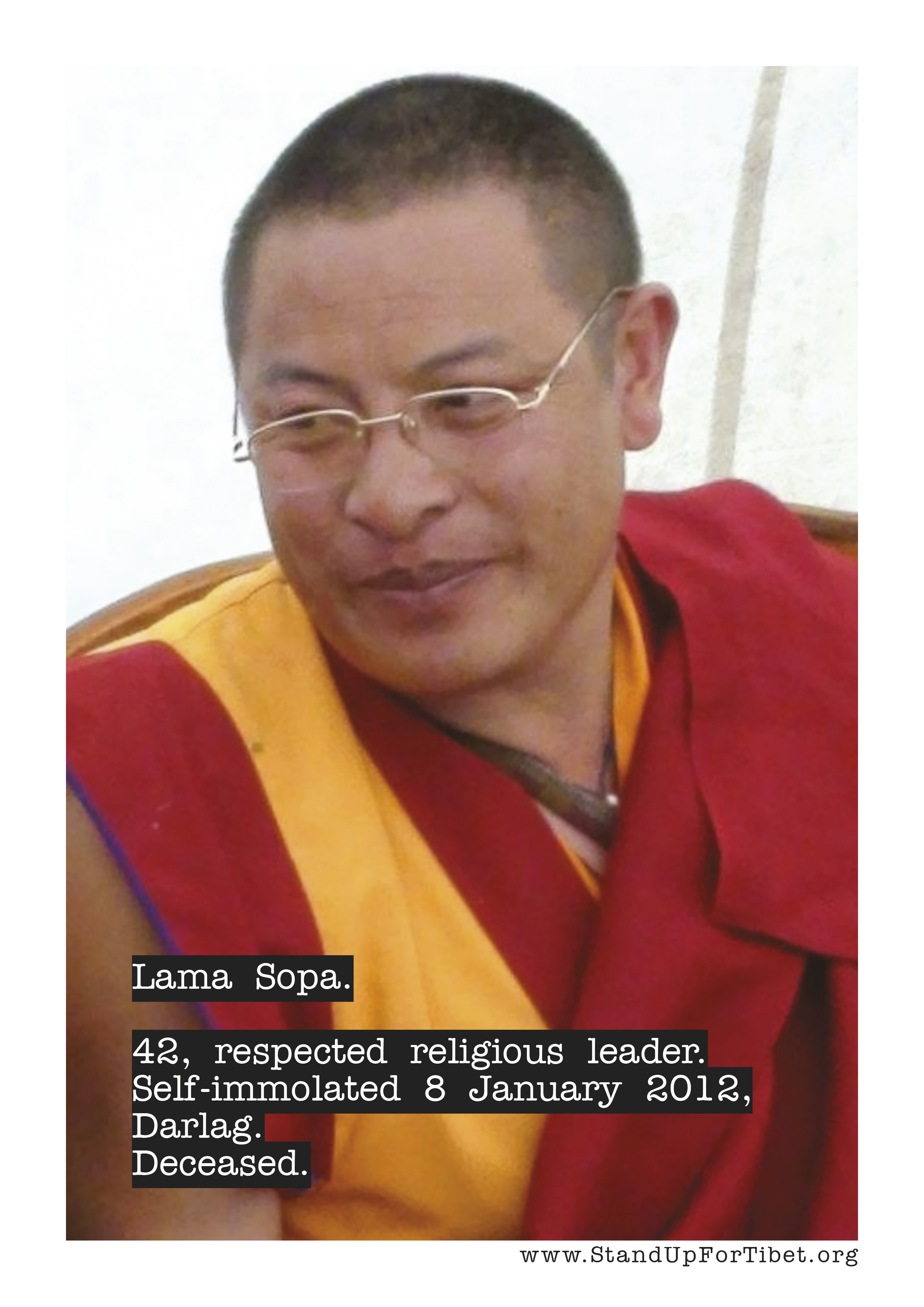 “I am giving away my body as an offering of light to chase away the darkness, to free all beings from suffering” – Lama Sobha

On 8 January 2012 Lama Sopa, a highly respected monk, set himself on fire and died in front of the police station of Darlag (in Chinese, Dari) county in Golog Tibetan Autonomous Prefecture. His protest was said to be linked to lack of religious freedoms in Chinese occupied Tibet.

Before he set himself ablaze he distributed leaflets in which he wrote that he was performing the deadly act “not for his personal glory but for Tibet and the happiness of Tibetans”. He explained that he believed “Tibetans should not lose their determination. The day of happiness will come for sure. For the Dalai Lama to live long, the Tibetans should not lose track of their path”.

Before his protest, Lama Sopa, recorded a tape that was later found wrapped in his robe saying that he was offering the sacrifice of his life and body “as a token of long-life offering to our root guru His Holiness the Dalai Lama and all other spiritual teachers and lamas.” The nine-minute long recording, spoken in the Amdo dialect, is interspersed with prayers for the long life of the Dalai Lama, and a moving call to Tibetans for unity and the protection of Tibet’s culture, religion and language “by using all your resources and by involving your body, speech and mind.” In the tape, Lama Sobha expresses respect and admiration for those Tibetans who self-immolated, saying that “until now” he “lacked the courage” to do the same. A full translation into English is enclosed below.

Photographs of the body of Lama Sopa emerged from Tibet shortly after his protest. The harrowing images show the burned body of Lama Sopa lying beside a shrine in his monastery in Golog, Amdo. The images emerged at a time of serious unrest and crackdown in eastern Tibet, with new details emerging of peaceful protests last week and their aftermath in Pema in addition to the protests and vigils in Ngaba and Kardze. Graphic images of Lama Sobha can be viewed here (http://www.savetibet.org/lama-sobha-photos-graphic-content/).

To all the six million Tibetans, including those living in exile — I am grateful to Pawo Thupten Ngodup [Tibetan exile Thubten Ngodup self-immolated in Delhi on April 27, 1998] and all other Tibetan heroes, who have sacrificed their lives for Tibet and for the reunification of the Tibetan people; though I am in my forties, until now I have not had the courage like them. But I have tried my best to teach all traditional fields of knowledge to others, including Buddhism.

This is the 21st century, and this is the year in which so many Tibetan heroes have died. I am sacrificing my body both to stand in solidarity with them in flesh and blood, and to seek repentance through this highest tantric honor of offering one’s body. This is not to seek personal fame or glory.

I am giving away my body as an offering of light to chase away the darkness, to free all beings from suffering, and to lead them – each of whom has been our mother in the past and yet has been led by ignorance to commit immoral acts – to the Amitabha, the Buddha of infinite light. My offering of light is for all living beings, even as insignificant as lice and nits, to dispel their pain and to guide them to the state of enlightenment.
I offer this sacrifice as a token of long-life offering to our root guru His Holiness the Dalai Lama and all other spiritual teachers and lamas. [Lama Sobha recites prayers of the Mandala Offering.]

/ The universal ground purified with blessed water spread, / This magnificent continent adorned with the sun and moon. / I offer them with pure realm of the enlightened in mind, / May all sentient beings enjoy this pure land! / My mind, body, speech, all my possessions and merits, / And this precious Mandala and all other offerings / I offer all these to the Three Jewels with my fervent prayers / Compassionately accept these and bless me and all other sentient beings. / I send forth this bejewelled Mandala to you, precious teacher!

I am taking this action neither for myself nor to fulfill a personal desire nor to earn an honor. I am sacrificing my body with the firm conviction and a pure heart just as the Buddha bravely gave his body to a hungry tigress [to stop her from eating her cubs]. All the Tibetan heroes too have sacrificed their lives with similar principles. But in practical terms, their lives seemingly ended with some sort of anger. Therefore, to guide their souls on the path to enlightenment, I offer prayers that may lead all of them to Buddhahood.

May all spiritual teachers and lamas inside Tibet and in exile live long. Especially, I pray that His Holiness the Dalai Lama will return to Tibet and remain as Tibet’s temporal and spiritual leader. [Lama Sobha recites this long-life prayer for His Holiness.]

Circled by ramparts of snow-mountains, this sacred realm, / This wellspring of all sustenance and happiness. /Tenzin Gyatso, bodhisattva of compassion. / May his reign endure till the end of existence. / May his great deeds spread across the space.
All those who have forms and are formless / Those who bear hostility towards the Buddha dharma / May all of them be found and defeated / By the Three Jewels and the power of truth. [Lama Sobha also recites other prayers.]

To all my spiritual brothers and sisters, and the faithful ones living elsewhere: You must unite and work together to build a strong and prosperous Tibetan nation in the future. This is the sole wish of all the Tibetan heroes. Therefore, you must avoid any quarreling amongst yourselves whether it is land disputes or water disputes. You must maintain unity and strength. Give love and education to the children, who should study hard to master all the traditional fields of studies. The elders should carry out spiritual practice as well as maintain and protect Tibetan language and culture by using all your resources and by involving your body, speech and mind. It is extremely important to genuinely practice Buddhist principles in order to benefit the Tibetan cause and also to lead all sentient beings towards the path of enlightenment. Tashi Delek.

To all my close friends, relatives, students, everyone from my native home and especially xx [name not clear in the audio]; I have not accumulated any wealth in my life. Whatever I had, I spent it on teaching and in pursuit of spiritual matters. This will leave no doubt or talks about having left behind huge sums of money. Thus, my siblings, relatives and patrons from different places should bear this in mind. As for my personal belongings and other items, I hope they will be given away to needy people or offered to spiritual teachers and lamas.

May all the merits that I have accumulated benefit all sentient beings, especially those who are suffering in lower realms such as hell. I offer these prayers for them to attain higher rebirth. [Recites more prayers.]

To my spiritual friends living in exile: I want to request you not to be sad. If you single-mindedly pray to the spiritual teachers and lamas, we will be inseparable until we all attain Buddhahood. I would like say the same thing to old people and the general public. Remember, whether in times of happiness or in times of sadness, or for that matter, under any circumstances, our only refuge is the Three Jewels. You must never forget this. Tashi Delek.

A Chinese translation of this text can be found here