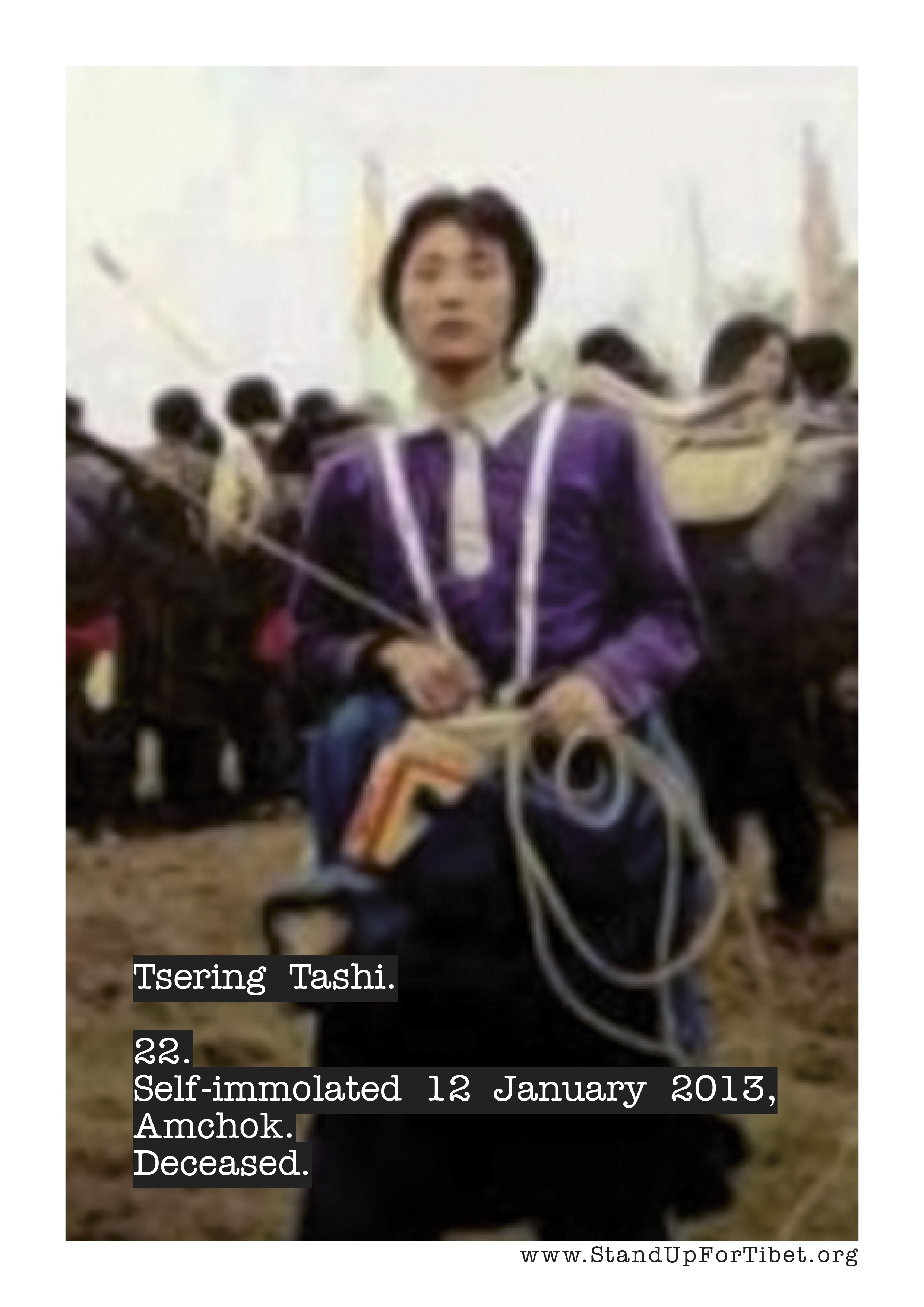 Tsering Tashi was the first Tibetan to set fire to himself on fire in 2013; he died from his injuries.  His body was removed from his home by the authorities and cremated in the middle of the night before his family had carried out traditional prayer rituals.

A harrowing video of his protest found its way into exile and showed Tsering Tashi lying on the street in flames, lifting his hands into a prayer position and saying the name of the Dalai Lama.

Following Tsering Tashi’s self-immolation Chinese police and Public Security Bureau officials arrived in Amchok in numerous vehicles. They barred the monks of Amchok monastery and local lay Tibetans from offering prayers and ordered Tsering Tashi’s family members to cremate the body as soon as possible. When the family initially said that they needed to perform the customary religious rituals for a death, they were threatened and told that they would be responsible for the consequences if they refused.
Amchok township is located in Sangchu (Chinese: Xiahe) county, Gannan Tibetan Autonomous Prefecture, Gansu province (the traditional Kham area of Tibet).

In December 2012 the Chinese Communist Party announced criminal penalties for “Anyone who organizes, plots, incites , coerces, entices, abets, or assists others to commit self-immolations,” warning that such persons “shall be held criminally liable for intentional homicide in accordance with the Criminal Law.” (Those Who Incite Self-Immolations Must be Severely Punished Under the Law, Gannan Daily, December 3, 2012. Translation into English by Dui Hua).

According to relatives of Tsering Tashi who are in exile, the authorities threatened the family after his self-immolation, with one official accusing them of having close ties with the “splittist Dalai group.” When Tsering Tashi’s mother was told of the order to cremate him straight away, without carrying out the traditional rituals, she fainted and had to be taken to hospital, according to the same sources. Tsering Tashi’s body was cremated late on Sunday night (January 13), when most people were asleep, and the Chinese authorities allowed only a few people to attend the cremation.

Tsering Tashi was married to Yumtso Kyi and is survived by his wife, parents and two sisters. He was described by Tibetans who knew him as “good-natured and polite” with a keen passion for horses and horse racing. A Tibetan in exile who knows his family told ICT that he was educated to 10th grade level. The same Tibetan said that the self-immolation had been a complete shock to the family, as he had not talked about it. The Tibetan in exile said: “He did have a strong feeling about the need for the Dalai Lama to come home, and I hear he had talked about that recently. He was aware of self-immolations that had happened in Amchok and other places. People are dying for the Dalai Lama. There is no doubt about that.”