In recent weeks, news has emerged from Tibet exemplifying China’s continued disregard for human rights and the rule of law. Harsh prison sentences have been handed out to those peacefully expressing themselves, whilst others have been arrested for protesting against Chinese rule. Anti-mining protesters have been fired upon by security forces resulting in 13 injured. Also, three men arbitrarily detained have been tortured by drunken police officers. 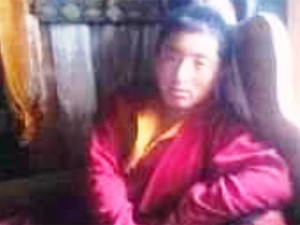 A young monk has been sentenced to 10 years’ imprisonment for staging  peaceful protest against Chinese rule in Tibet. Lobsang Gendun  (pictured right) is believed to have been tortured during his detention  and there are concerns for his health.

Gendun’s family learnt of his sentence on 12 September when they  received a phone call from him. However, Lobsang gave no details of his  trial or where he is currently being held.

The 21 year-old monk from Drongsar monastery in Chamdo (Ch:  Changdu or Qamdo) prefecture, (now incorporated into China’s Tibet  Autonomous Region), was arrested on 1 July 2013 after protesting  during an official event to mark the founding of the Chinese Communist Party. According to a source quoted by Tibet Post International, Gendun shouted “Tibet is an independent country” and “Long live His Holiness the Dalai Lama.”

According to source quoted by Radio Free Asia, on 28 January, a court in Chamdo ordered Lobsang Gendun’s parents to instruct their son to “confess to his crimes”. However, Gendun is understood to have refused the order, asserted his innocence and “called on the Chinese authorities to confess their guilt in their own faulty policies in Tibet”. He also accused the police of torturing him whilst in detention. After this episode, Gendun was not allowed visits from his family.

The exact date of the sentencing and the precise charges brought against Gendun are not known. His current condition is also not known, though one report indicated his health was deteriorating. There are fears that Gendun did not receive due process during his trial. Tibetans charged with political crimes often are tried in secret, are not allowed independent legal representation and evidence against them is often extracted by torture.

Two Tibetans have received harsh prison sentences after sharing information via an online messaging service as part of an anti-fur campaign. Jamyang Wangtso, 32, and Namgyal Wangchuk, 43, were sentenced to seven and five years respectively by a court in Riwoche (Chinese: Leiwuqi) county (now part of China’s Tibet Autonomous Region) in May 2014. They were convicted of “picking quarrels and provoking trouble”. News of their sentencing has only recently been received in exile.

According to a transcript of the verdict, obtained and translated by Tibetan Centre for Human Rights and Democracy, the two men were arrested on 2 January 2014 after sharing text and photos with 15 people on WeChat, a popular China-based social media service. one photo was apparently of two people wearing leopard fur-lined chubas (traditional Tibetan coat, example pictured right) and the text was aimed to shame the coat wearers. According to the transcript the chuba-wearers were referred to as “meat-stealers”, “scum” and “jackasses”. Another message added, “Good environment needs trees, and trees need wild animals for company. Please care for them with compassion, don’t kill them brutally for meat and fur.”

There are concerns Jamyang Wangtso and Namgyal Wangchuk did not receive due process. The document provides no indication that the two men had independent counsel. Their current condition and location of imprisonment is not known.

On 9 August, thirteen Tibetans were wounded when Chinese security forces shot into a crowd protesting against mining operations. Most of those injured were hospitalised, including a pregnant woman shot in the leg. No further details are known on the condition of the injured or if any arrests took place.

The protest took place in Tsang Tobgyal township, Namling county, Shigatse (Chinese: Rikaze) prefecture (now part of China’s Tibet Autonomous Region). According to a source quoted by Radio Free Asia, most of the residents of the township’s 16 villages took part in the protest.

News of the incident only reached exile sources at the beginning of October, due to the blocking of communication lines in the area by the Chinese authorities.

In late September, another anti-mining protest took place in Tibet, with over 1,000 Tibetans participating. The protest took part in Zibuk village, Maldro Gongkar (Chinese: Mozhugongka) county, Lhasa municipality. Local Tibetans are said to be concerned at the high levels of pollution from a local mine, and its effects on human health as well as crops and wildlife. It is not known if there have been any arrests.

During the protest, which took place in front of a large crowd, Wangchuk held up a banner and shouted slogans before Chinese police arrived and took him away.

According to various sources, Wangchuk shouted slogans calling for religious freedom for Tibet, for the long life of the Dalai Lama and the Dalai Lama’s return to Tibet. He is also said to have condemned China’s oppression in Tibet. His banner made references to human rights, freedom and the return of the Dalai Lama.

According to a source quoted by Tibetan Centre for Human Rights and Democracy, “[Wangchuk] is a great patriot and deeply cares about his people. He engages in charity work. Although he is doing well as a businessman, he always bemoaned the lack of freedom in Tibet. He didn’t shy away from expressing this truth.”

Passang Wangchuk is a 37 year-old father of three, lives in Kardze town and is originally from Buchu Yarkhab village, Serchu township, Kardze county. In 2008, Wangchuk’s sister was jailed for two and a half years after taking part in a protest. She was tortured during her incarceration and is now said to suffer from physical disabilities.

In September, a group of intoxicated Chinese police officers detained and tortured three Tibetan men, leaving one in critical condition in hospital. The police have since claimed the Tibetans were drunk and aggressive.

According to Tibetan exile sources, a group of police officers, apparently already in a drunken state, arrived at the archery event and demanded Tibetans join them in drinking toasts. When Wangchuk’s brother challenged their behaviour he was thrown into a police vehicle. Wangchuk and Tenzin Rinchen, who tried to intervene, were also forced into the vehicle. All three were then taken to the Chentsa county detention centre.

According to a source quoted by Radio Free Asia, “That night, about eight policemen brought in boxes of beer, hung the Tibetans from the ceiling, and after drinking struck them with the empty bottles on their ribs and knees, later forcing them to the floor and urinating on them.”

The following morning, Tenzin Rinchen was discovered to be injured so badly he could not move and was taken to the local hospital. He was later transferred to a hospital in Xining and found to have six broken ribs (pictured right).

A police officer from Chentsa county detention centre, contacted by Radio Free Asia, denied the torture allegations. The officer claimed the three Tibetans “were brought in for picking quarrels and stirring up trouble because they were drunk” and that “they had assaulted a police officer”.

The police have since taken Tenzin Rinchen back to a local hospital where he is reported to be in a critical condition and unable to speak or eat. Wangchuk and his brother were released from detention on 22 September, however their condition is not known.

The monks are said to have removed the flag from the terrace of their monastery before burning it. Further details about the incident, including the exact date of the incident and the monks’ current whereabouts and condition are not known due to communication restrictions imposed by the Chinese government.

Driru county has been at the centre of unrest since September 2013 when the Chinese authorities ordered local residents to fly Chinese flags from their homes. Many Tibetans refused, leading to arrests and protests, followed by a major security crackdown.

Special Thanks to Tibet Society for this updated news

Why Do Tibetans Self-Immolate?